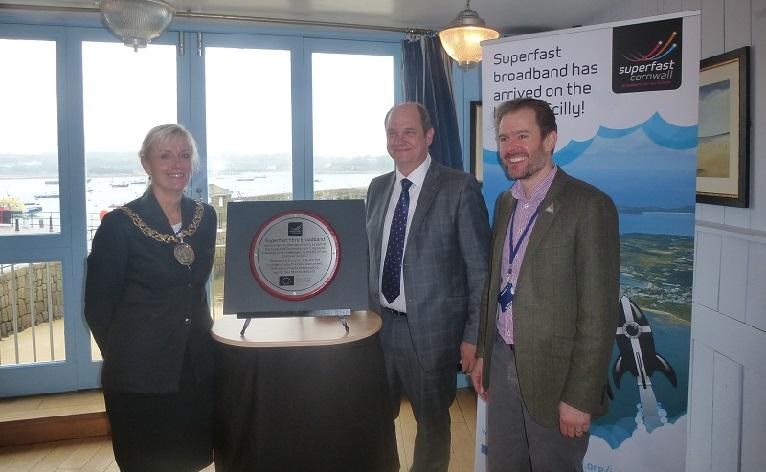 Superfast Broadband has officially arrived on the Isles of Scilly. The occasion was planned to be celebrated with a visit from Lord Ahmad, the Parliamentary Under Secretary of State for the Department for Communities and Local Government, along with Gavin Patterson, the CEO of British Telecom.

Unfortunately the vagaries of the winter weather on the islands saw their flight from Newquay forced to turn around after being unable to land owing to restricted visibility.

The event continued with Superfast Cornwall Operations Director for BT, Jeremy Steventon-Barnes, standing in for Mr Patterson to offer thanks to everyone involved in making this project happen.

Chairman of Council Amanda Martin addressed the audience to point out exactly what this project means for the future of the islands.

Finally Chief Executive Theo Leijser acknowledged the achievement of the public and private sectors coming together to finance and deliver such an ambitious project before unveiling a plaque that will be put in the ground at Porthcressa beach where the fibre broadband cable joins from the mainland.

A link was set up later between Poole Innovation Centre and the islands to allow Lord Ahmad and Mr Patterson to acknowledge the success of the project directly with the Chairman and Chief Executive of the Council of the Isles of Scilly.