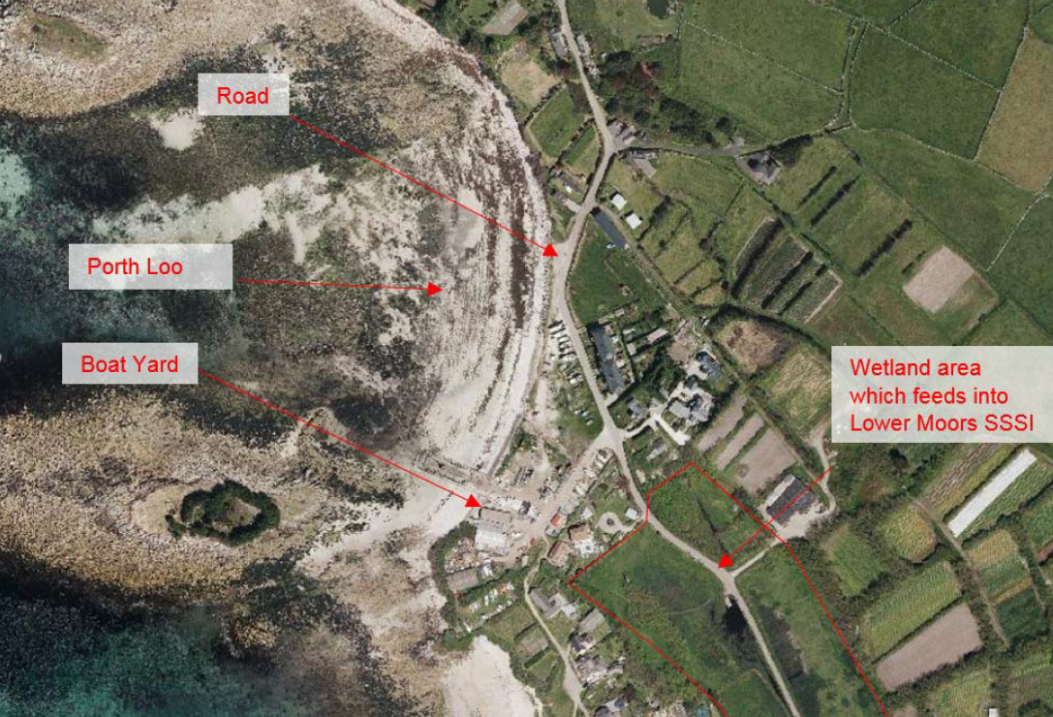 What’s the problem?
Porthloo beach is approximately 300 metres long with a number of businesses and residential properties nearby. Protecting Porthloo from erosion and the risk of flooding to the nearby domestic and commercial properties is a key objective of the sea defence proposals.

On the south side businesses such as Scillonian Boat Building and Repairs are close to the beach, placing them at risk of flooding. Directly inland from the beach is the Duchy Boat Park, which is used mainly for storing boats out of season and is also in a vulnerable position. The slipway at the beach for launching boats is a critical piece of infrastructure, especially for the St Mary’s Boatman’s Association, and there is also a footpath running parallel to the beach used frequently by locals and visitors. There are several residential properties on Porthloo Lane that are also threatened by flooding.

At the southern end of the beach there is a sand dune that provides protection from flooding. The northern extent of the beach is defended by ad hoc placed rocks of various sizes, backed by an embankment next to the road. This section has been susceptible to erosion and waves breaking over and flooding the road when there are storms. There is also a significant risk to the Lower Moors SSSI, as the wetland area to the south east of Porthloo is vulnerable to flooding. The sea water will feed into the Lower Moors from here and this can harm local wildlife. 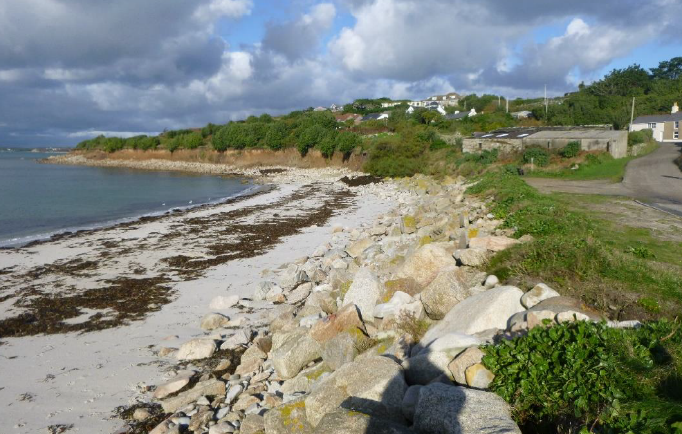 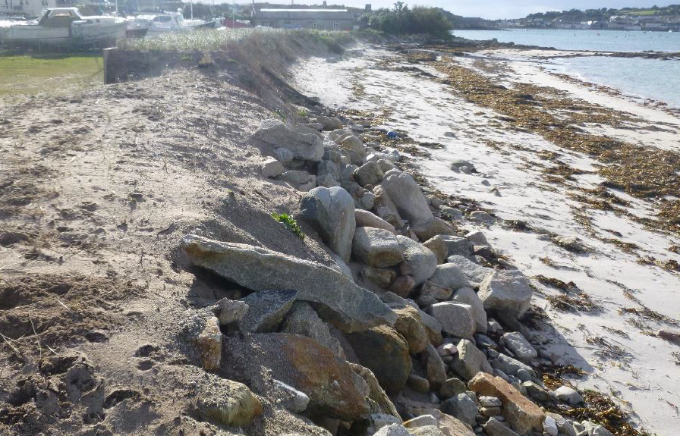 Rocks will be placed across a wide section of Porthloo beach (see below for location). Existing rocks will be reused, and additional granite of the same colour and type will be added. The rocks will be backfilled with sand next to the embankment and the wooden retaining wall that supports the existing defences will be extended along the footpath. 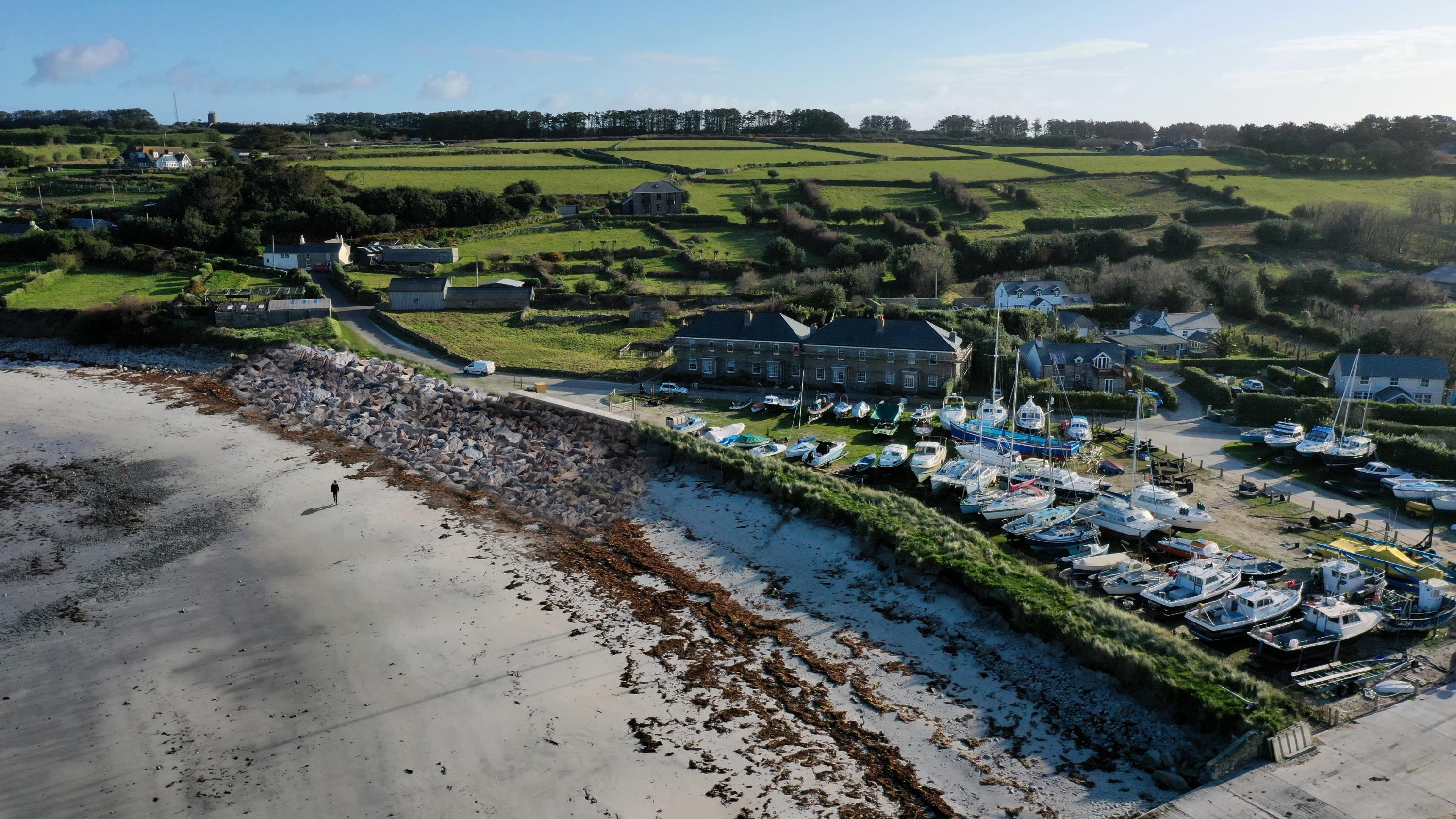 Once the work is complete the new defences will not significantly change the character or views of the beach. Temporary minor impacts to wildlife are expected during the construction process. The construction of the rock protection will result in loss of beach habitat in a relatively small area on the northern end of the beach, as shown below.

Work is estimated to to last two months with the start date to be confirmed. The road at Porthloo will remain open to public traffic during construction. Pedestrian and vehicle access will remain to properties behind the beach, and the boatyard will remain open. The footpath parallel to the beach will be diverted with clear signage, and reinstated when construction is completed.

Thank you to everyone who submitted feedback on the proposals at Porthloo. The responses have all been helpful and will inform our planning application. There were a range of questions and opinions submitted and we have summarised these, providing answers below.

The proposals don’t go far enough, you should be doing it all the way to the slipway. Are you considering rock armour south of the slipway to protect the boat businesses?

The southern end is protected already by an engineered dune, so we don’t need to add rocks there at the moment. No work is planned south of the slip. The north end, including the road, will be protected by the proposed rock armour.

If continuing sea level rise causes the existing engineered dune to retreat and disappear, or the proposed rock armour to be ineffective, we may need to revisit the sea defence works at Porthloo. The current proposal is designed to cope with sea level rise for about 25 years.

In 2014 excavations revealed peat deposits at Porthloo boat park. Will you be carrying out a Heritage Impact Assessment, with provision for an archaeological watching brief if necessary?

The results from the test pits at Porthloo investigated in 2014 are noted in the Environmental Statement for the proposed Climate Adaptation Scilly work. Three further test pits were dug in the proposed development area for the Climate Adaptation Scilly investigation. No peat deposits were found in the area to be affected by excavation. No archaeological watching brief is proposed for Porthloo.

Will there be easy access to the beach at the northern end? When storm boards are in place by the slipway alternative access will be necessary.

The rock armour will not extend along the complete length of the beach. We’ll have a look at access at the northern end to ensure it will remain feasible.

Will the placement of rock armour alter the tidal flow? And will this increase erosion where there isn’t any rock armour?

Tidal flow will not be effected by the rock armour, because the sea water will only reach it during a storm. Even when sea level rises, the toe of the rock armour will only be reached at the height of a small proportion of the highest tides and it will not affect tidal flow.

Placing rock armour in front of one part of the beach protects that part of the beach, but it doesn’t increase erosion elsewhere. This is because the waves on the protected part lose their energy by breaking up within the rock armour. Where there’s no rock armour, erosion continues at the same rate as before.

How high will the rock armour in front of the road be?

The rock armour is designed to meet the existing level of the ground at the northern end. At the northern end of the beach in front of the road it won’t block views, even for people sat in cars.

How long and tall is the wall extension going to be?