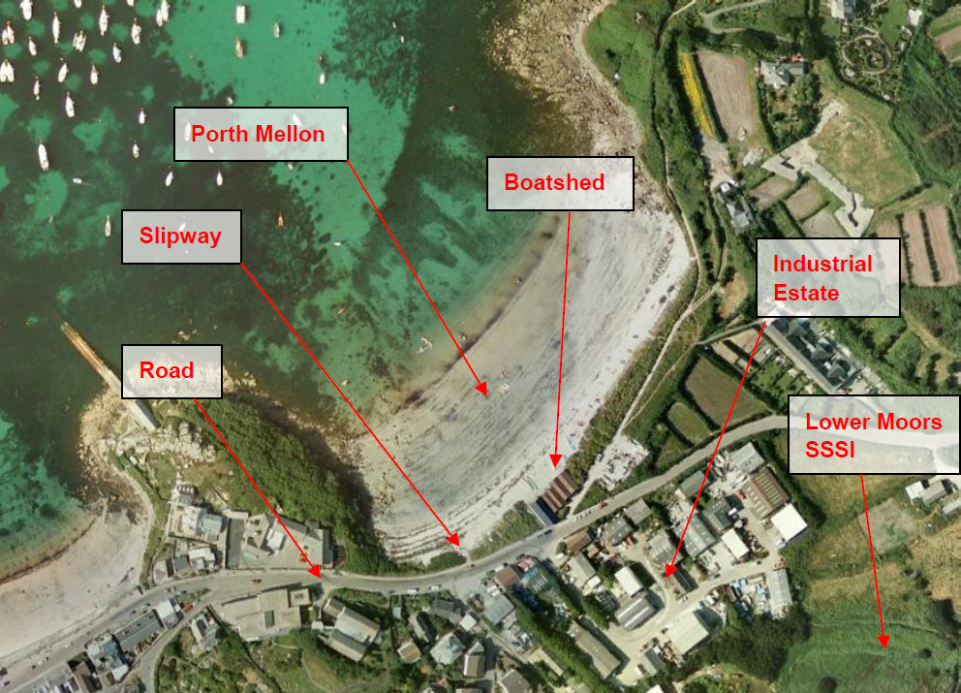 Porthmellon beach is on the outskirts of Hugh Town. Opening directly onto the beach are a couple of businesses, the Sailing Centre and the Beach restaurant, and between these lie the St Mary’s Gig Club sheds. On the other side of Telegraph Road behind Porthmellon is an industrial estate, which backs on to Lower Moors SSSI. The sand dune to the north of the Sailing Centre provides good flood protection to the properties behind, and the gig sheds have installed demountable barriers that provide defence against storm surges.

However, further erosion in the south-west corner of Porthmellon beach risks damage to the road. The likelihood of flooding here also increases the threat to businesses at the industrial estate, the recycling centre and the Lower Moors. 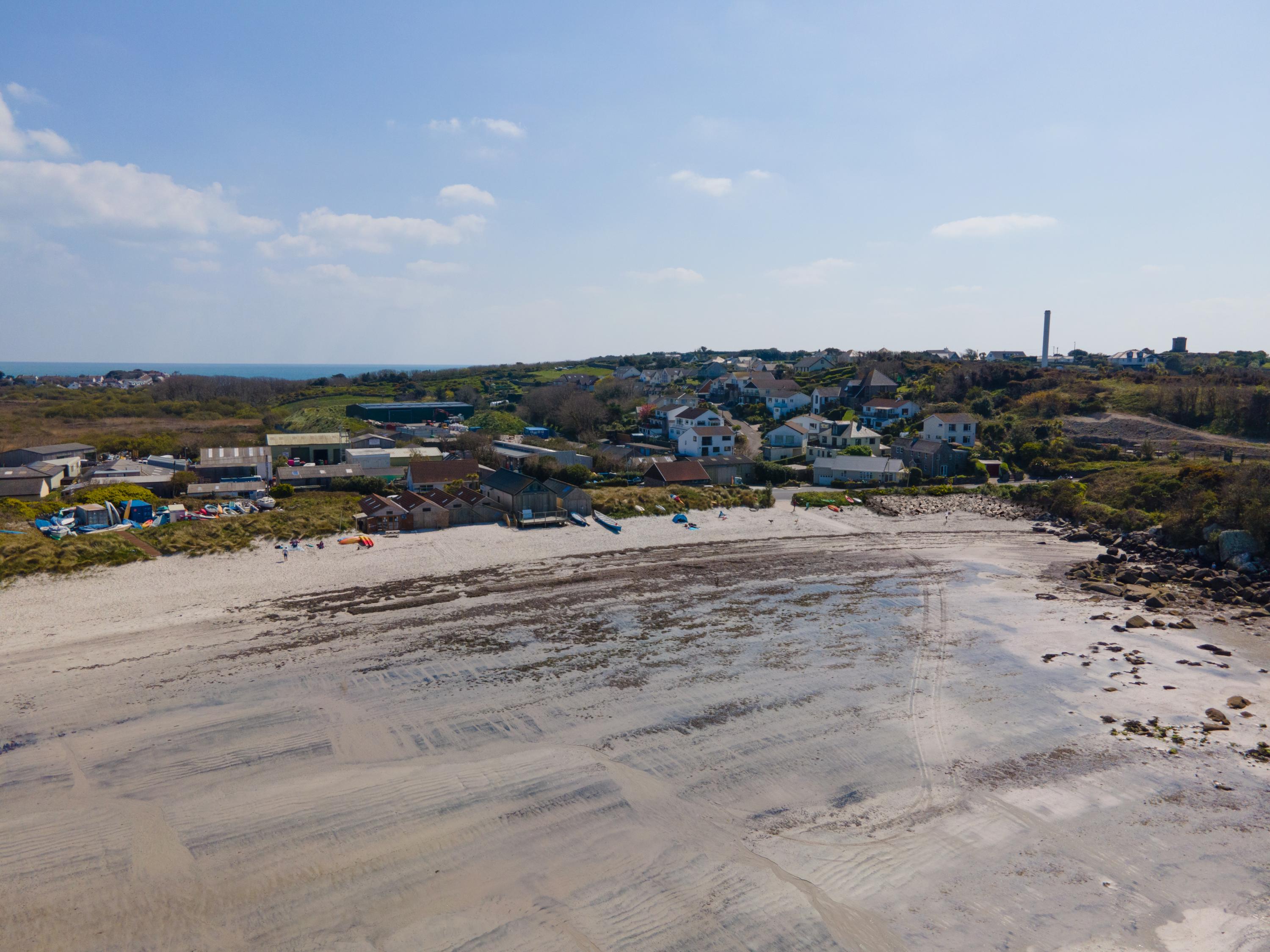 Rock armour is proposed to reduce the strength of waves, surges and overtopping onto the road and into properties behind. At the informal beach access path through the sand dune near the Sailing Centre a boardwalk will be constructed to allow easier access to the beach and to reduce erosion caused by people walking through the dune. 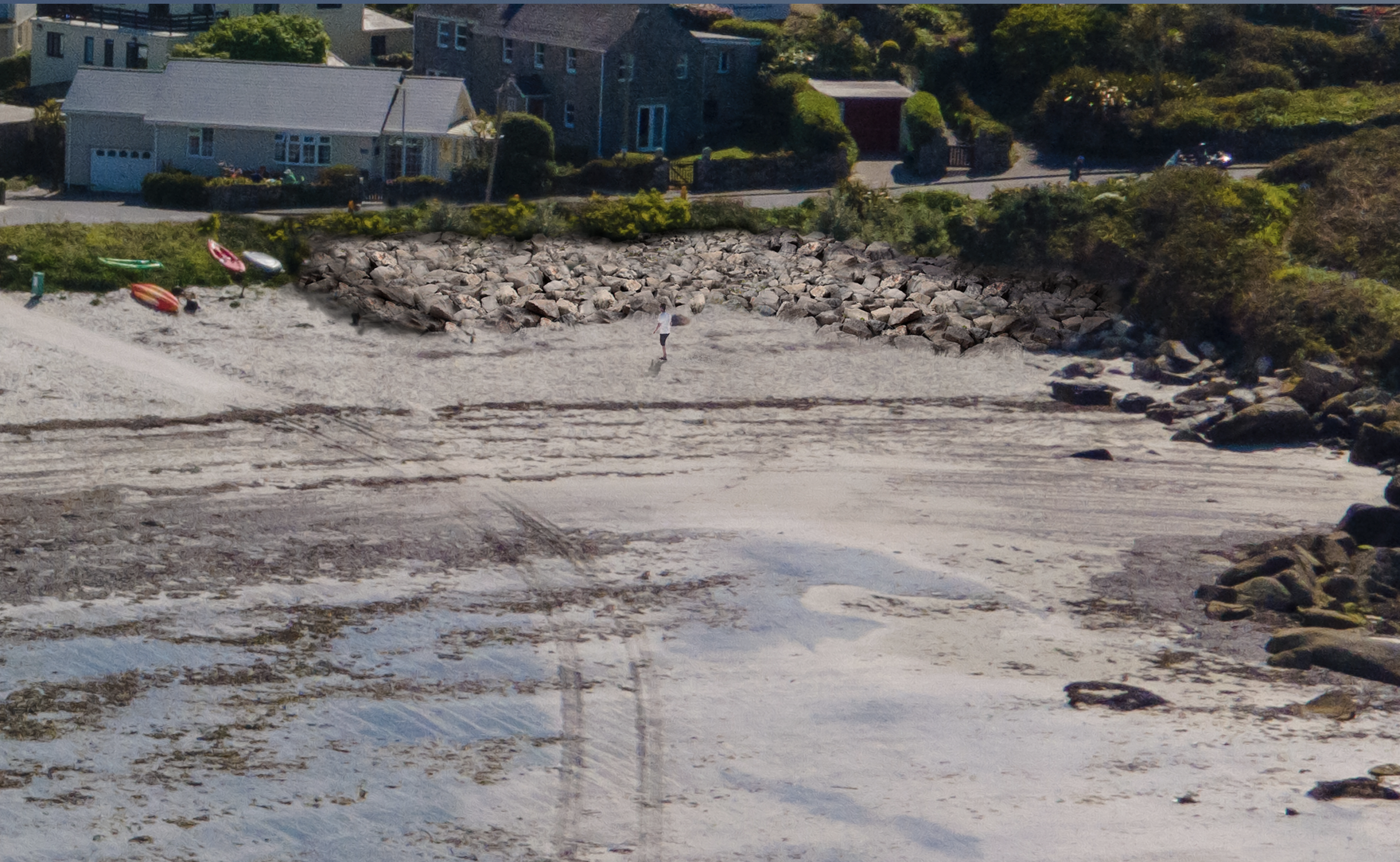 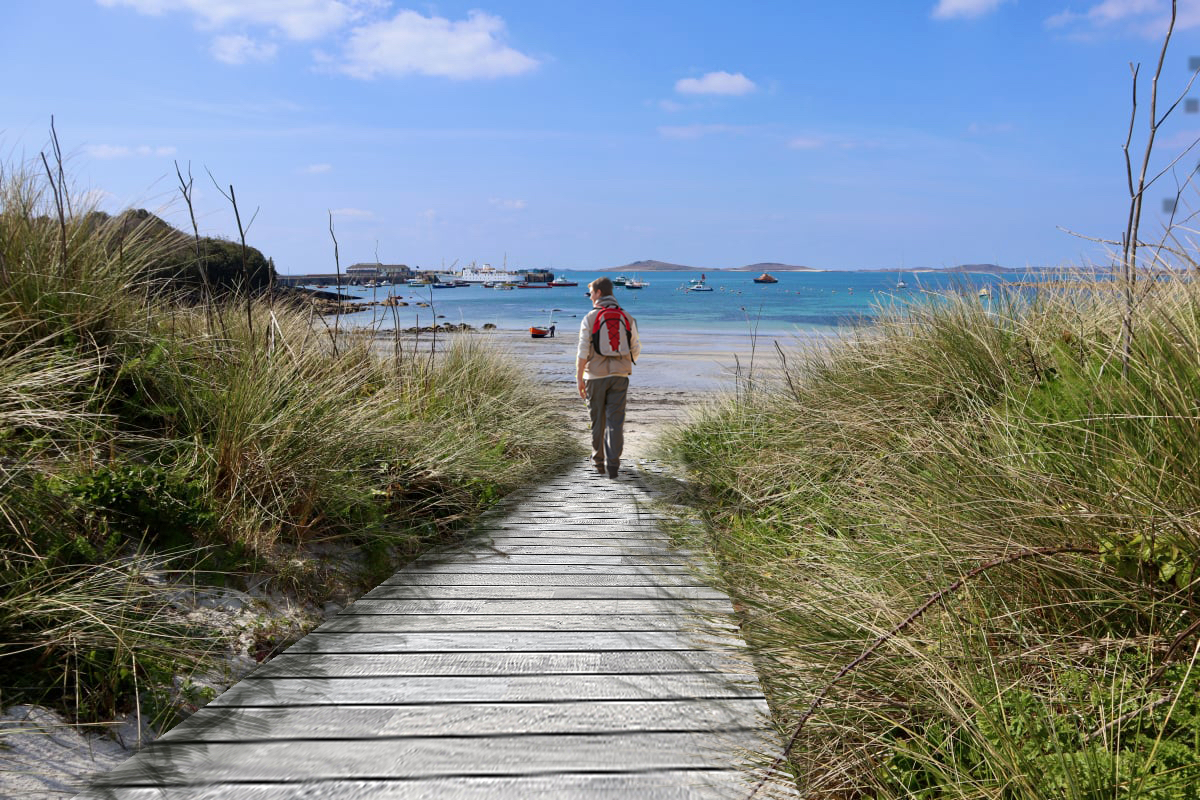 The completed rock armour will have a minor impact on how Porthmellon looks because it will replace sandy beach and affect a vegetated bank, but this will be on a relatively small scale.

Access to the site will be from the slipway off Telegraph Road, which will remain open during the construction period. The footpath running behind the Sailing Centre parallel to the beach will also stay open, with signs to advise the public when work is taking place.

Thank you to everyone who submitted feedback on the proposals at Porthmellon. The responses have all been helpful and will inform our planning application. There were a range of questions submitted and we have summarised these, providing answers below.

Is the use of rock armour a bit excessive just to protect the bank? Would this small area be better protected with a retaining defensive seawall?

Will placing rock armour affect the wave pattern and cause more erosion? Can you explain how the sea will disperse once the rock armour is in place?

Rock armour is intended to dissipate the energy of waves and protect the shoreline behind it from attack by the sea. The rock armour does this by offering lots of different surfaces at different angles to the oncoming wave, which reflects the energy back in many directions. This causes the wave to break up, rather than scour back. Where there’s no rock armour the coast is not protected, and it will continue to erode. A cliff can still collapse behind rock armour because it still gets wet, but the sea can neither strike the cliff directly nor remove the collapsed material easily.

What about the northern end of Porthmellon? I’ve seen the sea breach this corner and wash onto the track behind.

The impact of overtopping at the northern end of the dunes on the track behind is noted. We’ll look at what the impact of this is on the effectiveness of the coastal defences at Porthmellon.

Won’t the walkway encourage water to flow through here when there are storm surges?

Will this harm the local habitat for wildlife?

Previous surveys on Porthmellon have revealed peat deposits and archaeological remains. Have you done a Heritage Impact Assessment?

Impacts on the non-designated heritage assets have been assessed in the Environmental Statement. This was noted as having a ‘moderate negative impact’ because the archaeological remains would be permanently affected. There are no remediation measures identified or proposed.