There are eight sea defence proposals for Bryher and details for each of these are included below. You can also download images of the design proposals on the right hand side. These include a top down image and a cross section of the proposed work. Shortcuts to each individual site and a summary of the feedback that we've recevied so far are below:

The embankment in the eastern corner of the beach is beginning to erode. This is exposing the ram and destabilising the bank. This could lead to increased flooding from the sea in future.

We will improve protection a section of approximately 25 m of rock armour from the eastern corner to near the beach exit towards Fraggle Rock. The rock armour would be put in place to match the existing height of the embankment. 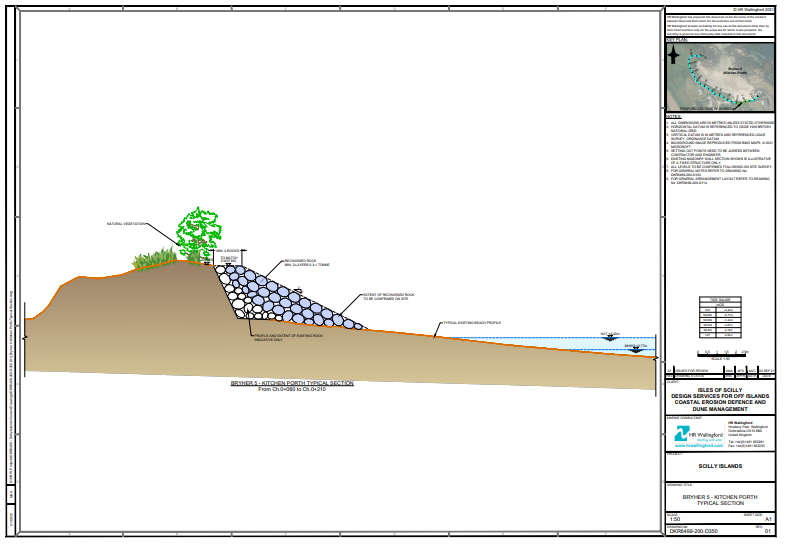 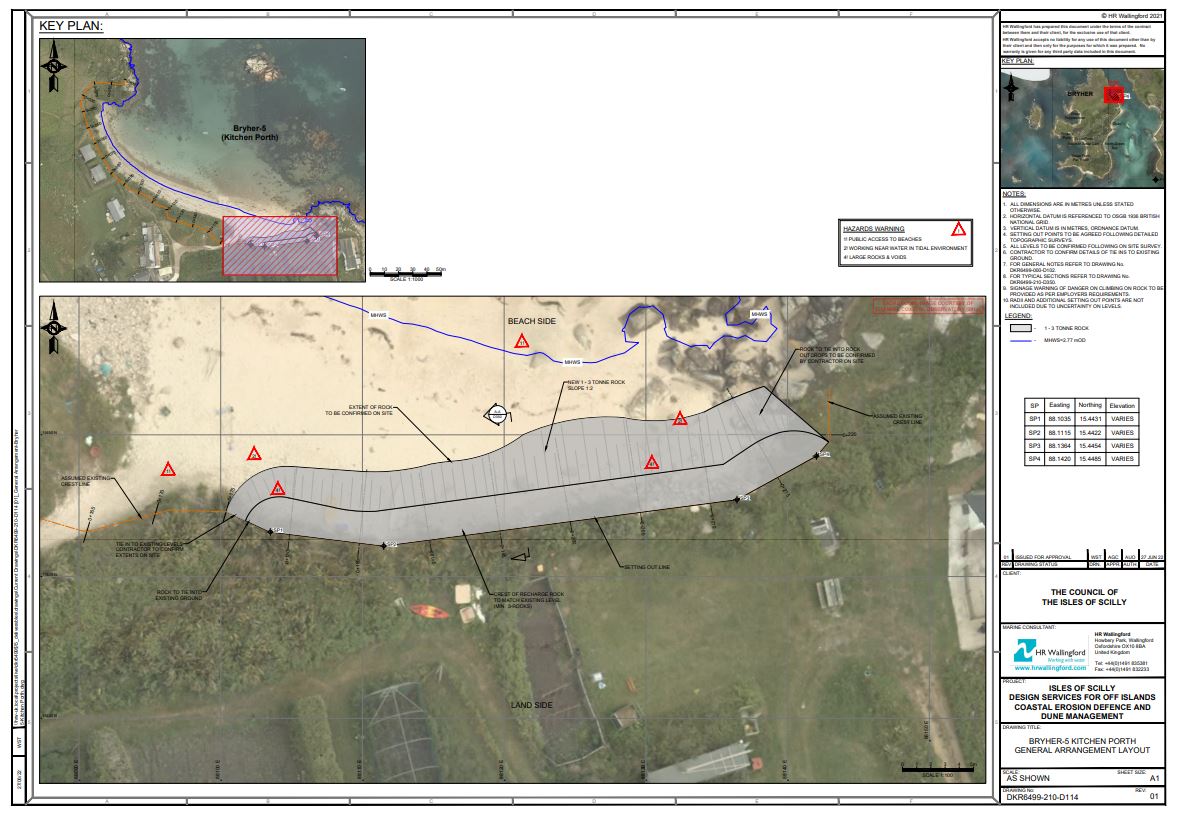 Where the quay joins the coastline there is clear evidence of waves causing erosion in this corner. This is also likely to be impacted by the public using this as a point of entry onto the beach. Some attempts to protect this area with rocks are evident, but this needs to be formalised to prevent the issue from getting worse.

The construction of a rock armour groyne is proposed, extending 10 m from the quay. The crest will be level with the top of the quay and the sides will slope down towards the beach. This will protect the corner of the beach and the likelihood of future damage to the quay wall. 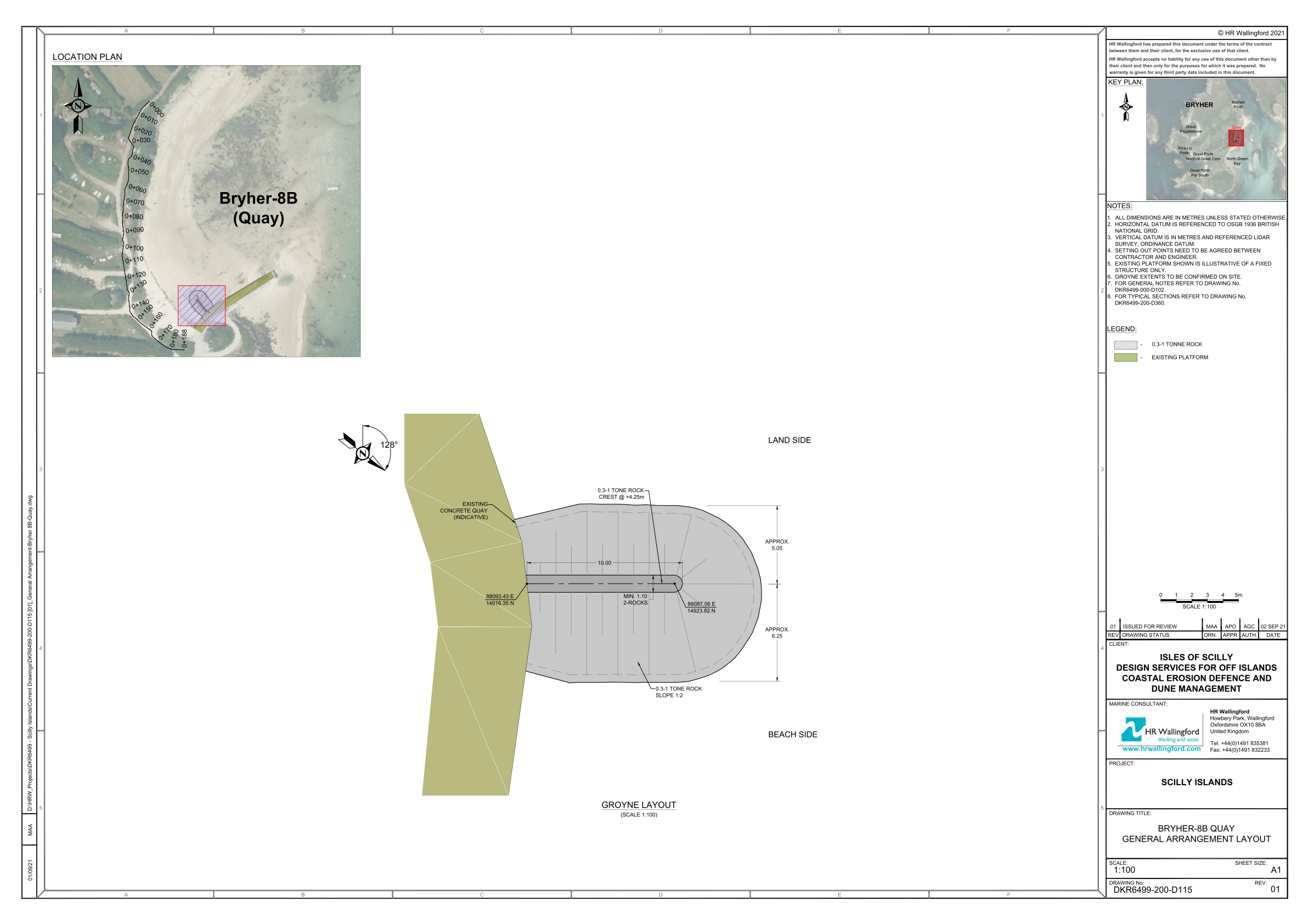 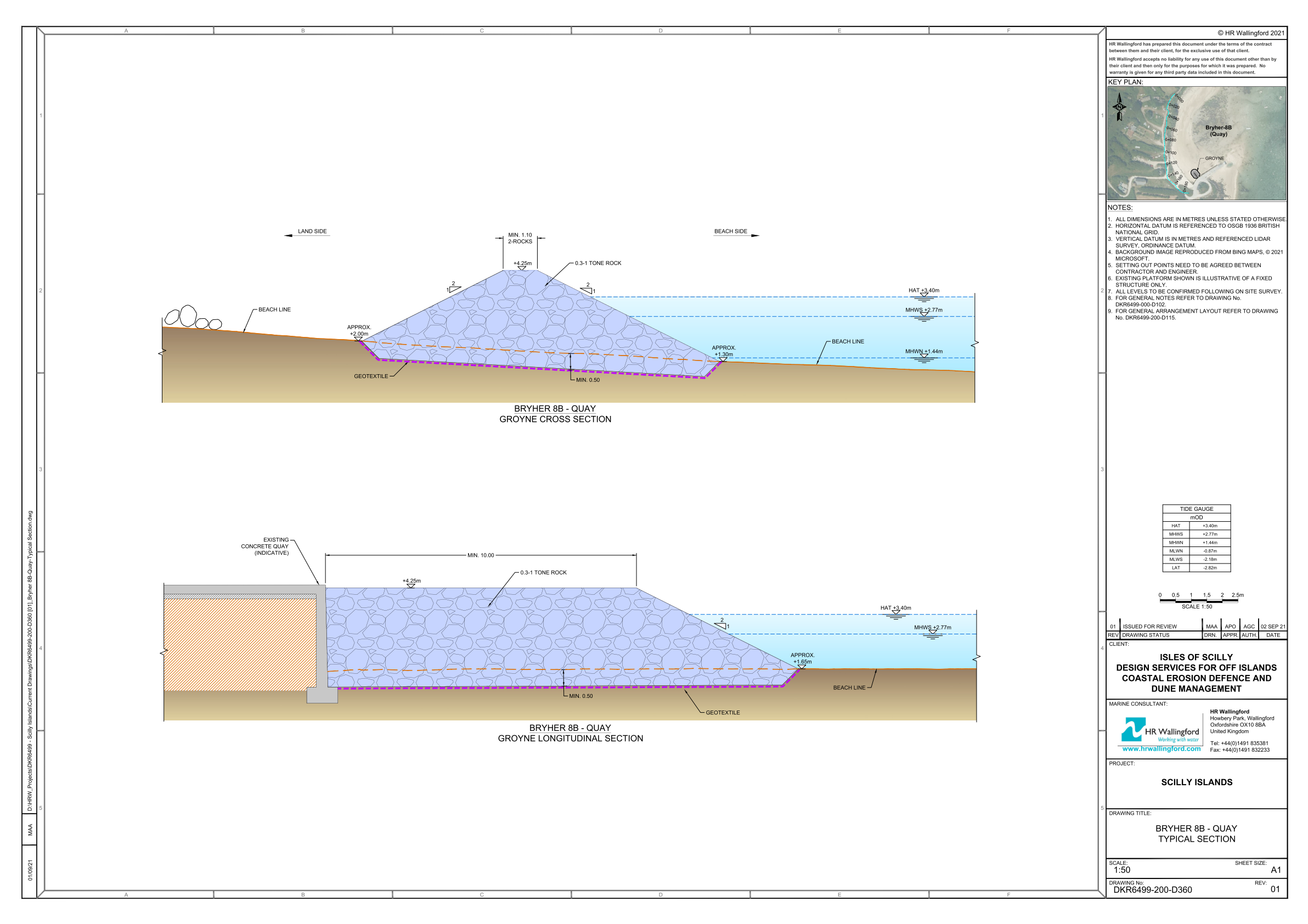 In the southern corner of Green Bay the sand/cobble embankment has been prone to overtopping. Although the bank itself appears to be quite stable, there is evidence that the crest is allowing overtopping waves to breach during extreme weather events. Historically this caused flooding down in Bennett Boatyard and also threatens the groundwater body under The Green.

To help with overtopping, geobags (geotextile bags filled with small rock) will be placed within the crest and then covered with natural reclaimed embankment material. This will raise the crest by approximately 0.8 m and will extend 70 m along the coast. The new crest will be contoured to blend into the land behind and will be re-vegetated to enhance its natural appearance and strengthen the embankment further. 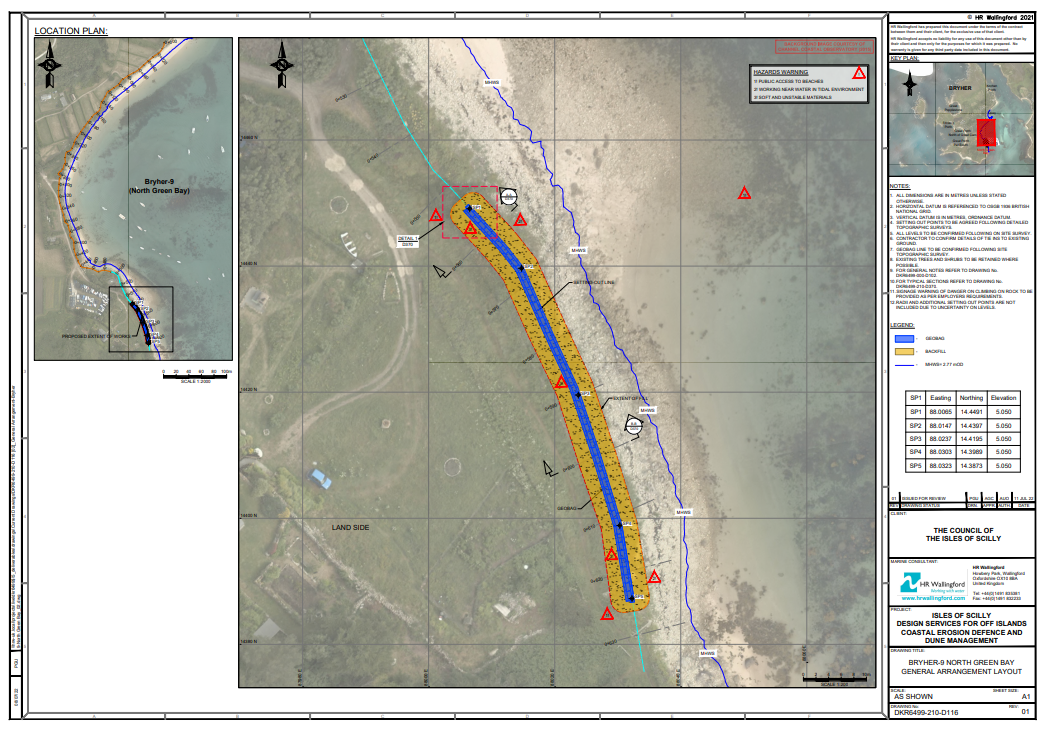 The crest at the south end of the beach is low and narrow and there is clear evidence of overtopping causing cobbles to be washed onto the land behind and of beach crest erosion. The gaps are also used by the public to access the beach which further increases beach erosion. This also threatens the groundwater body under The Green.

To prevent the beach crest retreating further, an 80 m rock armour revetment is proposed. The rock armour will raise the height of the crest by a minimum of 1.1 m and will slope down towards the beach and be buried into the sand at the bottom. On the landward side site-won topsoil and sand will be used to create a slope down to the existing land. Vegetation will be planted here to help protect the rear of the revetment from erosion and blend its appearance with the existing land. 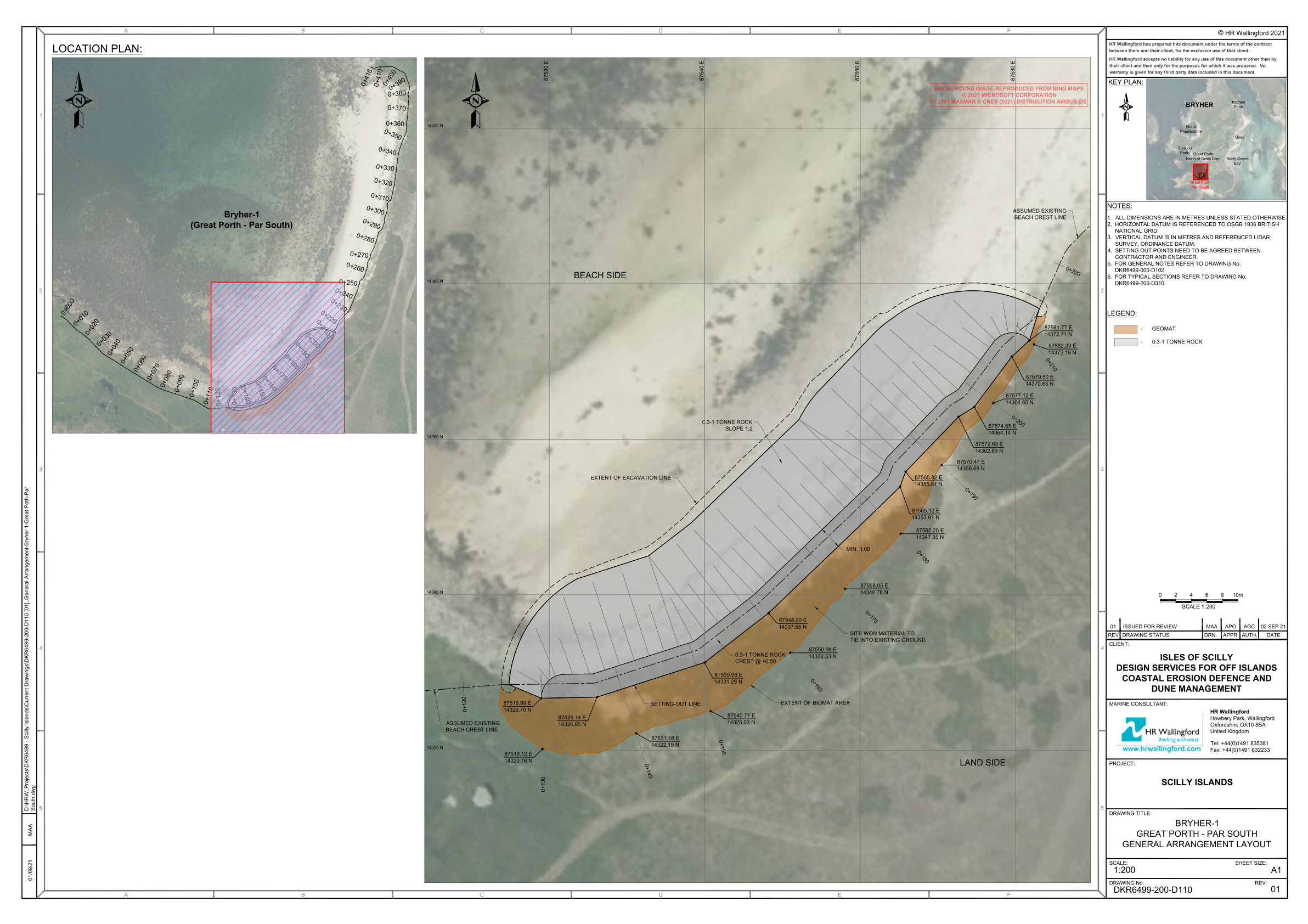 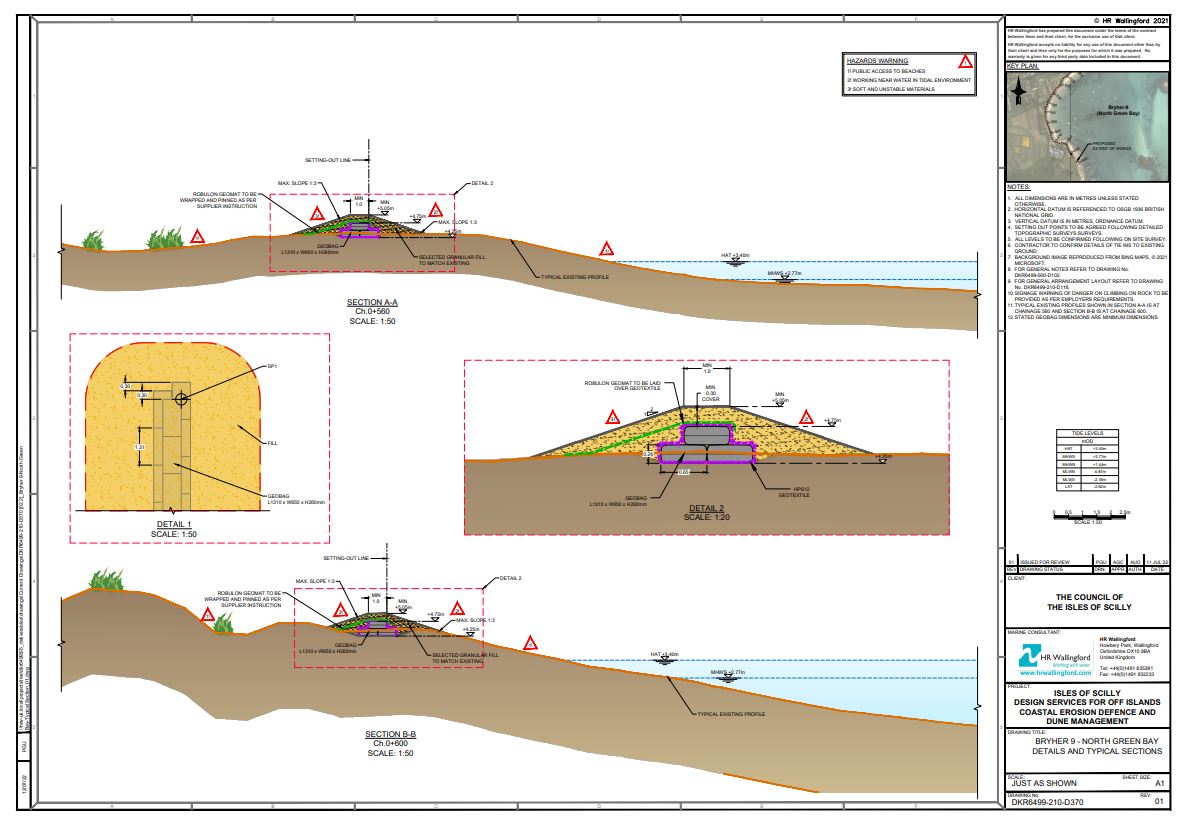 To the north of Great Porth, past the access ramp, there is an ad hoc embankment constructed from random large and small rocks, and earth. It’s currently unsuitable as a sea defence, but it is possible that some of the rock could be re-used here or elsewhere on the island for other defences. The vehicle and boat access ramp also provides a potential weak point because it is lower than the adjacent defences. All of this will help protect the area behind the beach and reduce the volume of seawater reaching the Great Pool.

The sea defences will be formalised here by using rock armour to protect against wave overtopping. The width of the crest will be extended from its existing position to  a minimum of 3 m and then slope down towards the beach. Site-won material will be used to tie in the rear of the rock armour to the existing ground.
Flood boards are also proposed to be installed at the access ramp. A steel frame would support these at either side, with a removeable column in the middle. The boards would be light enough to be put in place - and removed later - by one person. 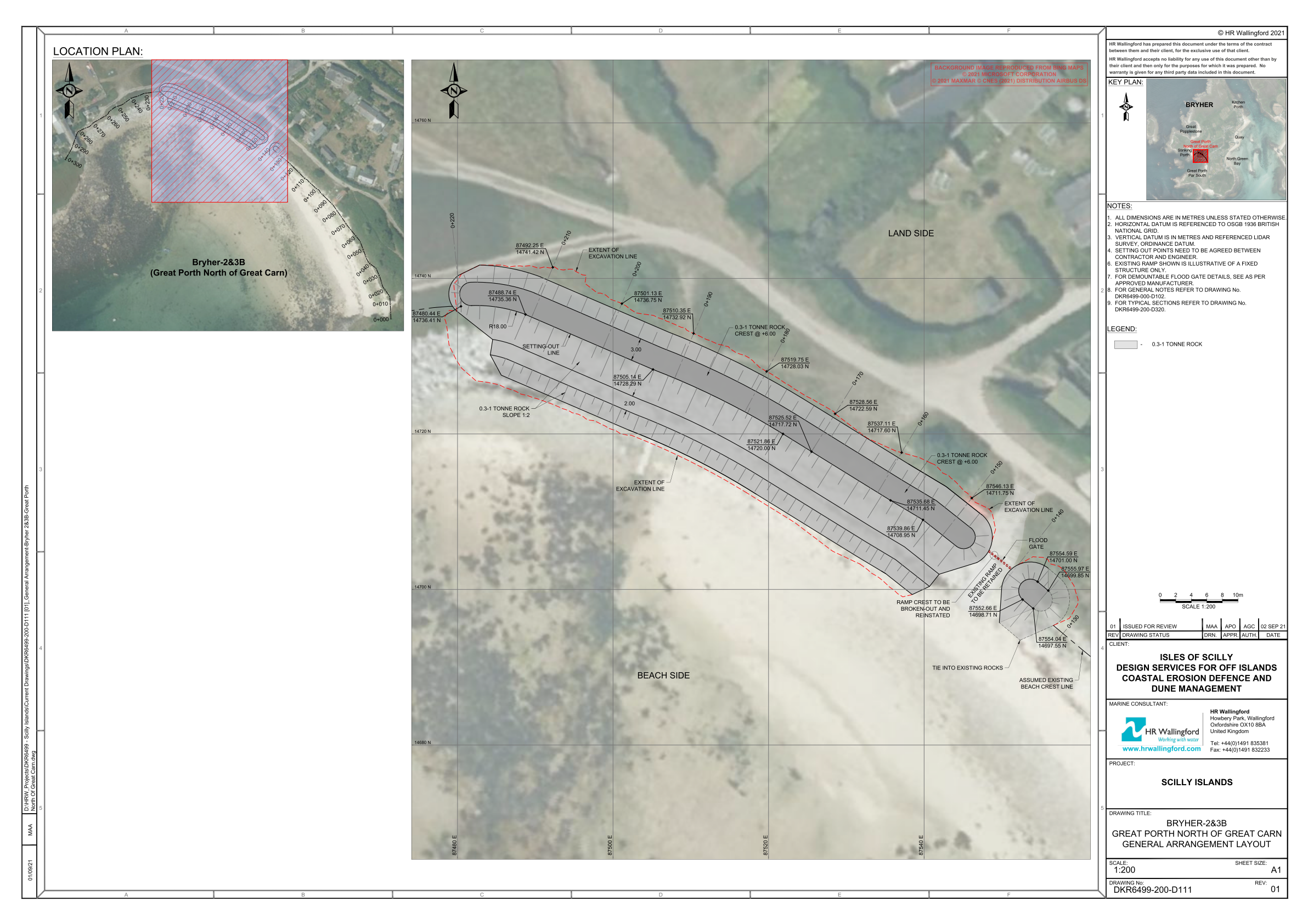 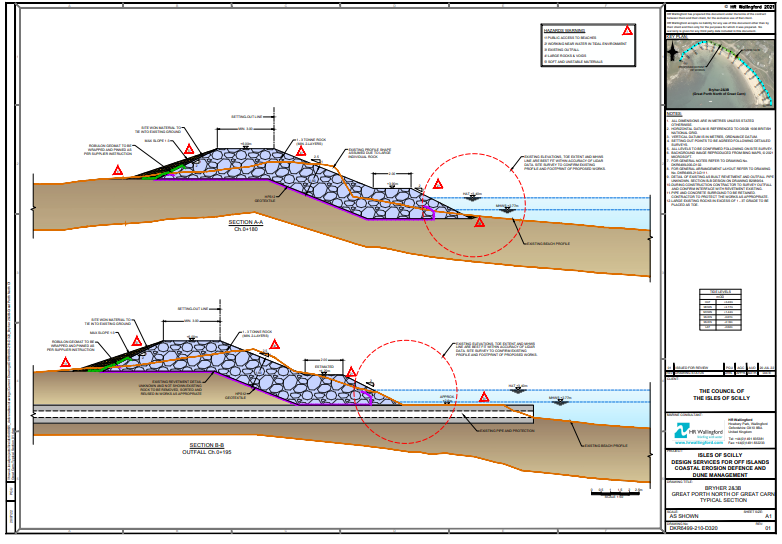 There is a low section of Stinking Porth where overtopping has occurred, and many cobbles and boulders have washed over into the land behind. To reduce overtopping of seawater into the Great Pool area, the crest needs to be increased above the present level.

By using rock armour, the crest would be raised by a minimum of 1.1 m which would extend along the length of the work. The new crest would have a minimum width of 3 m, and the rock would slope down towards the beach and be buried with sand at the bottom. On the landward side site won material would be used to blend the slope into the existing ground. 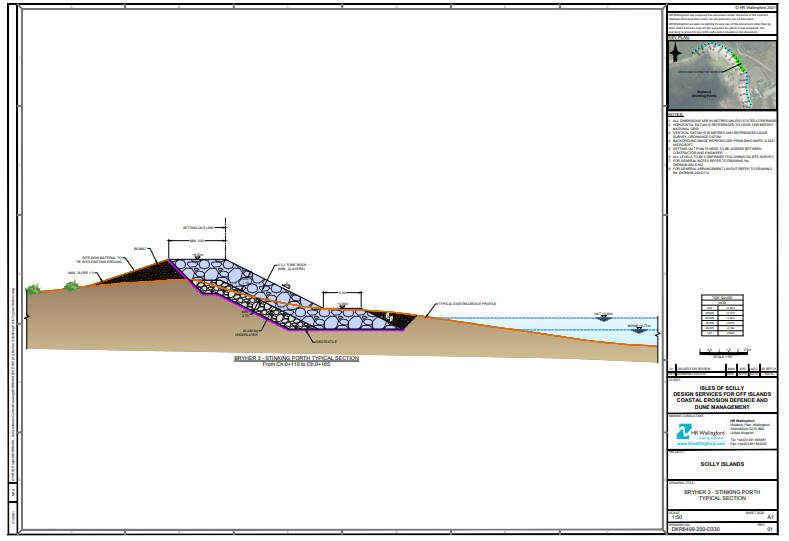 The southern end of Great Popplestone has historically suffered from significant overtopping. In order to protect Great Pool from seawater inundation more needs to be done to prevent overtopping.

Our proposal is to raise the height crest level of the existing sea defences. This would be achieved by adding mortared brickwork to the existing masonry wall and by placing additional rock armour on the seaward side of the wall. This would raise the height by approximately 0.6 m and the extra rock would also widen the width of the crest and help protect the wall against high seas. 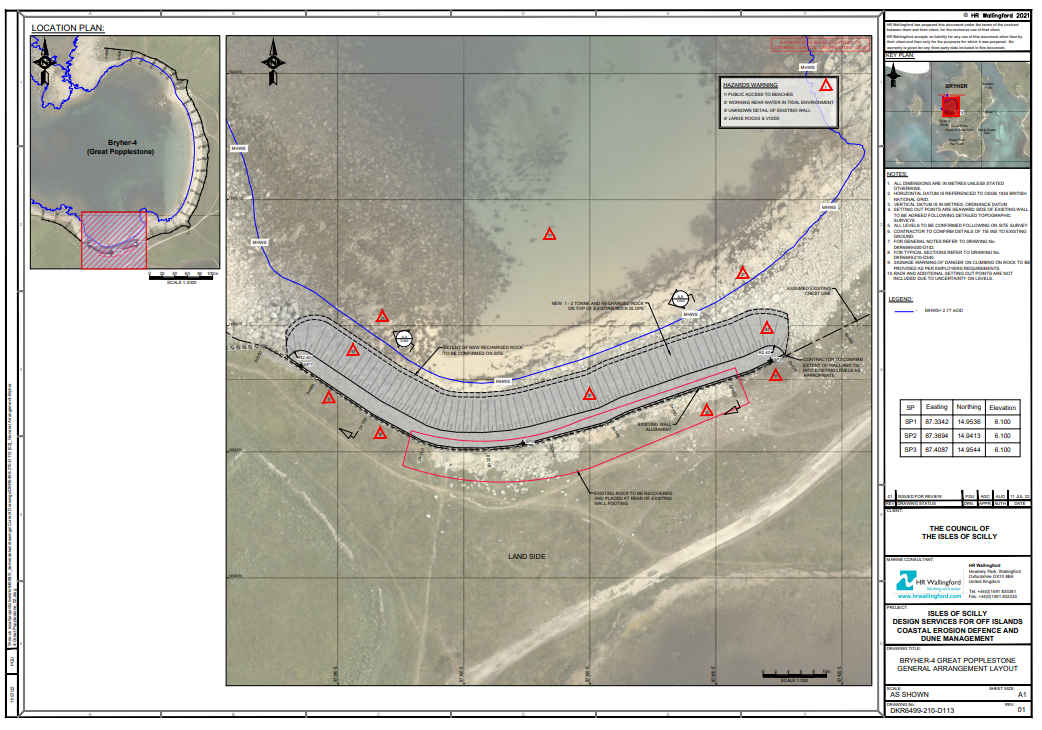 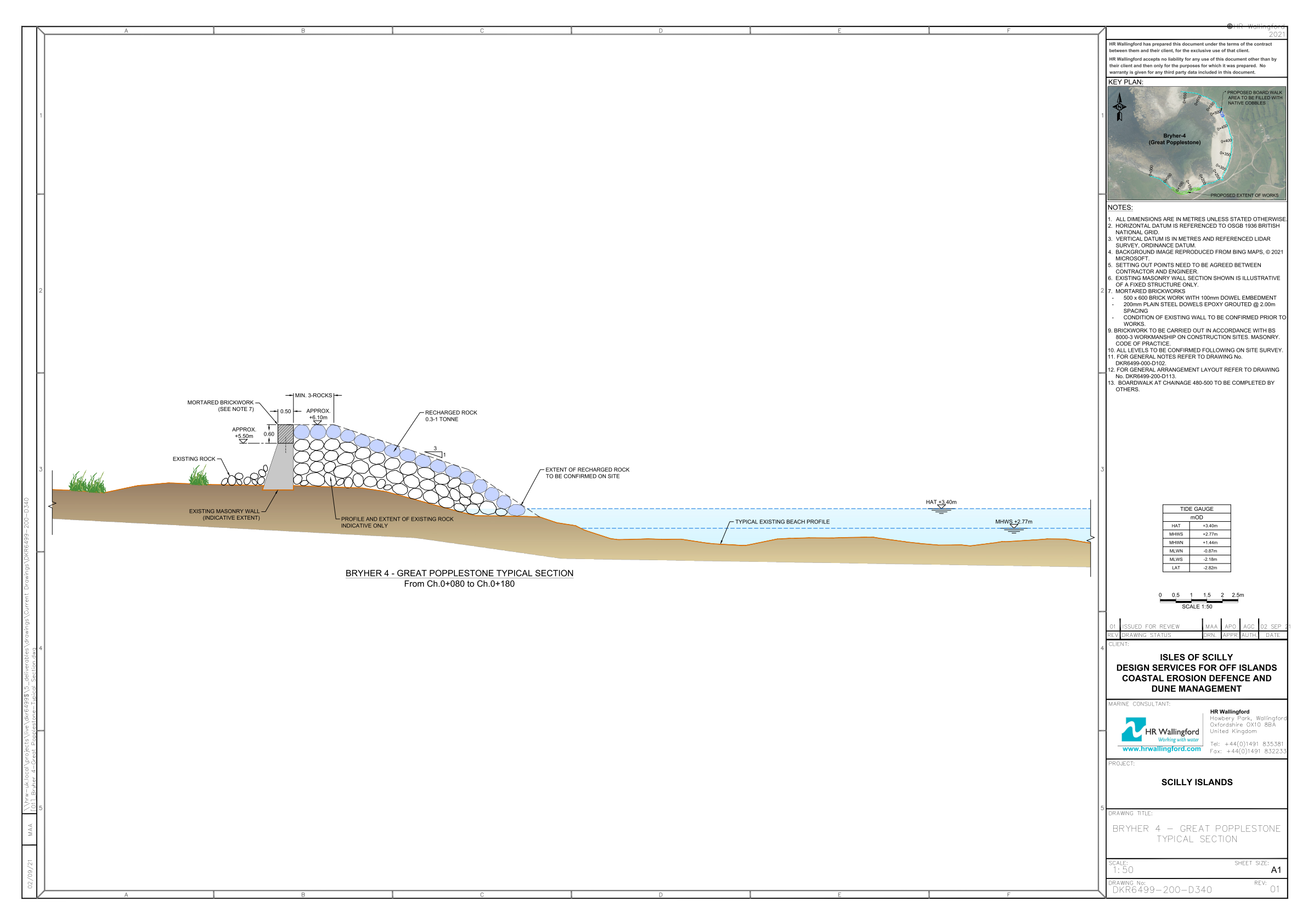 Some rock revetment work was completed at the north end of Great Popplestone in the 1990s by burying about 1,000 m3 of rock in the beach and dunes, with the upper surface of the rocks exposed. This rock is not protecting this part of the beach but appears instead to be focusing erosion adjacent to the exposed rock.

We propose to remove this Cornish granite rock and re-use it elsewhere on Bryher. The rock would be replaced with about 850 m3 of sand dug from the most inland overgrown and weed-ridden part of the dunes at Great Popplestone. This part of the dunes is not ‘active’ and appears to have low ecological value. By removing the weeds, re-exposing the dune to the wind and replanting with local, native dune species, this would also meet some of the objectives for management of the SSSI.

Thank you to everyone who submitted feedback on the proposals for Bryher. The responses have all been helpful and will inform the designs and our eventual planning application.

Is any managed retreat envisaged for Bryher?

The current shoreline management plan for Bryher proposes a policy of hold the line or do nothing for areas around Bryher. The exception to this is from Works Point to Great Carn where retreating the line is suggested.

How have you decided which areas need protection and which don’t at this time?

The areas that are most vulnerable to flooding from the coast were identified using a flood modelling study. Funding is available to protect businesses, houses, infrastructure and habitats most affected by flooding. In some parts of Bryher like Hell Bay and the Green, several beach frontages need protection to prevent flooding in the area behind.

Are there statements of what each of these proposals will achieve – identifying properties, environmental elements, infrastructure etc. which will be protected?

There is a ‘What’s the problem?’ statement for all of the proposed works available on the website.

Yes. However, these proposals are only intended to provide protection for the next 25 years. They have been designed to take into account the latest UK Climate Projections from the Met Office.

Why are you protecting the Pool?

The Pool of Bryher is connected to the surrounding groundwater body. Saltwater flooding of the pool and the surrounding land worsens existing salination of the groundwater body, from which the island’s reticulated water supply is obtained. The works at Great Porth North and Stinking Porth also help us protect residences and businesses in the area, and the ecological values of the SSSIs.

Can you extend the proposals at Stinking Porth to cover the full length of the beach?

Due to cost we are only able to carry out work on the most vulnerable section of the beach.

Why isn’t Stony Par being considered? This was breached significantly in 2014.

We are going to revisit solutions for this area. Options could include an earth embankment, or well-maintained drainage of The Green. We will have discussions with the designers and also conduct a site visit on the 8 March 2022 to get a better understanding of what’s happened in the past and what the options could be.

When does the Bryher work have to be completed by?

The current plan is to have all off-island work completed by March 2024. The start date of construction will depend on discussions with the company that successfully tenders for the work.

We don't want the conversation to end here so if you have any more questions about the proposals please get in touch at adaptivescilly@scilly.gov.uk.

Protection of Your Personal Information

The Council of the Isles of Scilly will use the personal information you provide to help it understand and respond to your feedback. By sending in an email to us in response to these site proposals you are agreeing for your information to be used in this way.